Introducing the latest winners of a €500 family portrait by Redmonds of Roscrea.

The Portrait Competition was established by Redmonds to mark their 40th year in business in Roscrea. They offered a family portrait to one winner each month for the 12 months of 2017.

Entrants were asked to describe why they would like to own a Portrait by Redmonds. Entries were judged by Aisling O’Loughlin formerly of TV3s Xposé and currently www.exquisite.ie.

Cathal Nash wrote: The last time Mr.Redmond took a photo of me i was only 3 years old still in my nappy! Would love to win this beyond words can express. 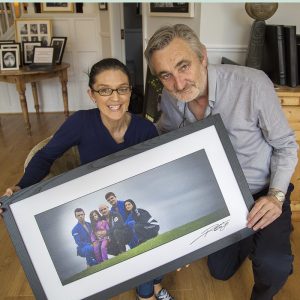 Sinead Culliton wrote:  I would love to win a Redmond’s family portrait because next year is the year my family starts to break up. My eldest son finishes college and heads off out into the world. Our second son is also leaving for Europe next September. Both will miss out on a debs, a communion and a confirmation and we will miss out on our second son’s 21st. A family portrait would be a wonderful reminder of how it is when we are all together. And while it obviously cannot replace our eldest sons, it would be a beautiful reminder until they return home again.
Thanks for the opportunity to win one. 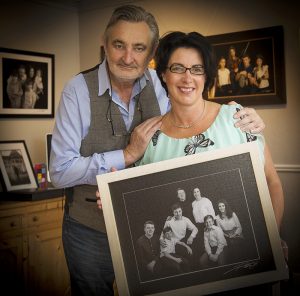 “We will be 40 years married in April of next year and as the years go on time is getting precious just like your photos do. We have 2 kid and 4 grandkids and we would like to leave them something precious to remember us by and what could be more precious then a Original Redmond Portrait. (On a personal note Congratulations to Brian and Theresa on your 40 years of recording the history of Roscrea and many, many, more years to come. Your Legacy will live on in Roscrea for ever and a day.)” 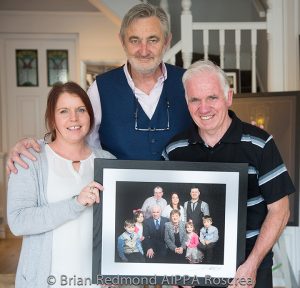 “My eyes lit up when I saw this competition. One thing my father in law, Dick Phelan,  and I have in common is our love for photography. We love looking at old photos that bring us happy memories. My love began at age 9 when my father died every day I’d look at all the photos I had of him to keep his memory alive. Dick lost his wife at a young age and also looks at all her photos. He is 90 in April and after rearing 7 boys I thought it would be a lovely idea to get a family photo of him and all the family for his birthday. Thats why I’d love to win this competition. Thank you for the  opportunity to enter. Triona 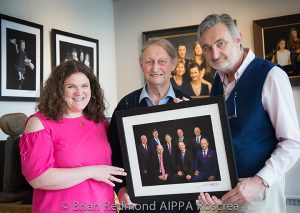 I would love to nominate my Mam & Dad, Mary & James Campion, for a portrait.

Redmond’s photographers were my Mam & Dad’s wedding photographer 43 years ago (16 November) and she is very proud when she tells people it was one of the first colour wedding albums that Redmonds produced. 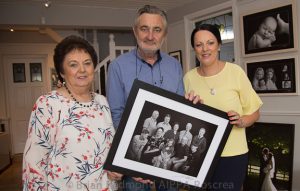 The fourth winner of a €500 family portrait by Redmonds of Roscrea was Angela Nolan.

Picture shows Brian Redmond, Photographer, presenting the family portrait to Angela and her sister and brother in law, Monica and David. Angela used her prize to have a portrait of grandparents and their grandchildren Allannah and Holly. 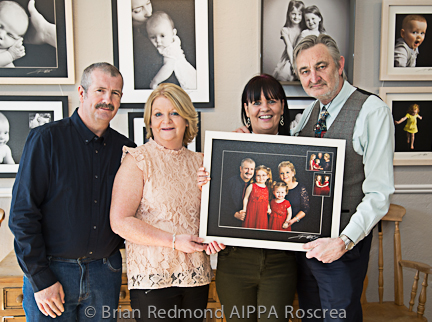 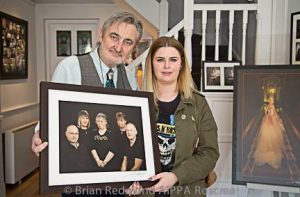 The third winner of a €500 family portrait by Redmonds of Roscrea was Diane Fairbrother.

Diane used the prize for her mother Mai and her siblings.

The family was getting together for the first time in 11 years including Finbarr who flew from Australia. 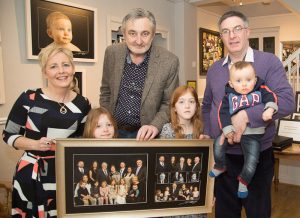 Tom Browne was 70 in December and to mark this milestone of a life well lived, his daughter Audrey from Limerick entered a very special competition to win a portrait by Redmonds of Roscrea who were celebrating 40 years in the business of photography.

To their delight they were judged to be the February winners ( one of 12 winners) of a 500euro portrait.
With a little effort all the family gathered in Roscrea and the result was this lovely combination portrait. Audrey and James are seen here with their children Robin, Ruby and Ronan and photographer Brian Redmond at the presentation in their landmark Gallery Studio in Roscrea. 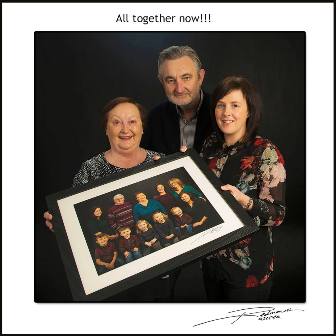 The Wymbs Family from Roscrea is one of the 12 Celebration Portrait winners with Redmonds of Roscrea, the Photographers.

Michelle wrote how her family would love a family portrait  by Redmonds.  Christmas was the first time the family would be together in 10 years….. the perfect time!

Grandparents Peter and Esther whose wedding Brian photographed back in 1977 were delighted to have their 4 daughters and 5 grandchildren (and of course Laura’s bump!!) all together for a professional family portrait.

Michelle herself was photographed at the studio as a child and now she is bringing her son Fionn for his portraits….a real family tradition in the making.