What would you do if you saw an old photograph lying in the street?
Step over it?
Pick it up?
What if you pick it up, what do you do with it then?

Well, when Fiona saw a photograph on Dawson St while on a visit to Dublin she knew exactly what to do. Having worked here at Redmonds of Roscrea for many years, she knew that if the picture got wet and trampled on, it was ruined forever. She picked it up and brought it home, took a picture of it and posted it on Facebook and Twitter. Within a few hours it had been shared and retweeted dozens of times and she had received lots of messages with tips about tracing the owner.

Thirty six hours after the initial post, a message pinged in from a lady called Sibheal saying that the lady in the picture was her Nana. And Nana was about to celebrate her 101st birthday! The photograph was being taken by Sibheal’s Mum to a photographers to be copied and framed as a present for the special occasion when it fell out of her bag.
Addresses were exchanged and the photograph was despatched (via registered post!) to be reunited with it’s rightful owners.

And here is the Birthday Girl Kathleen Doody, on her 101st birthday, holding the precious picture taken of her all those years ago! 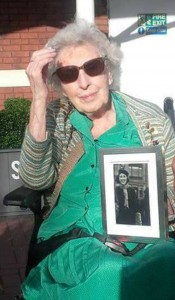